To be spiritually free 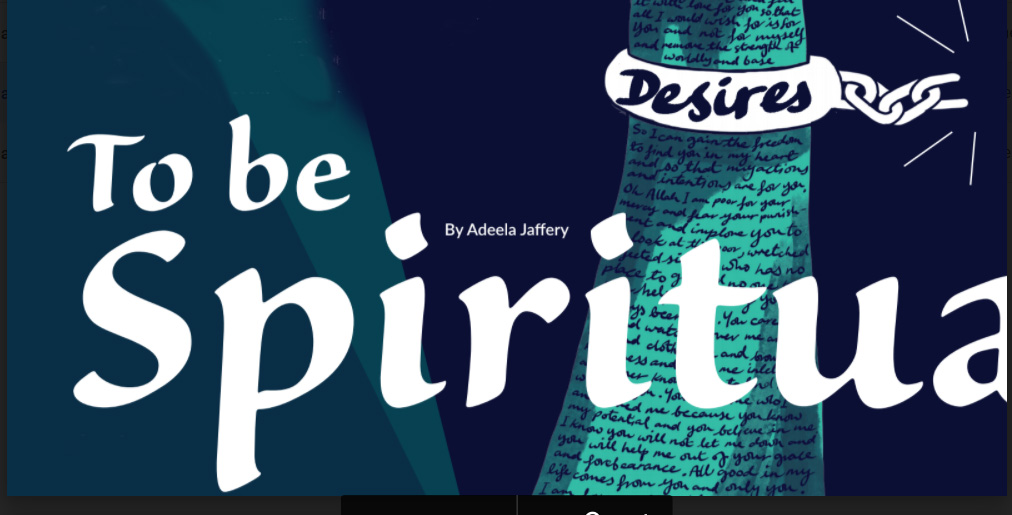 After witnessing the brutal massacre of all the male members of the Ahl al-Bayt (ʿa) in Karbala, and most significantly, Imām Ḥusayn (ʿa), Sayyidah Zaynab (ʿa) was amongst the members of the Ahl al-Bayt (ʿa) taken as a captive. From the courts of Ibn Ziyād in Iraq and the tyrant ruler Yazīd in Syria, the Holy Household (ʿa) was tied up, pelted with stones, whipped, and humiliated.

History narrates that after going through these horrific experiences, Sayyidah Zaynab (ʿa) and all the family members present, including the only surviving man and next Imām, Imām as-Sajjād (ʿa), were thrown in prison. Without a doubt, they faced the most extreme conditions one can possibly imagine. With little to no water, let alone food, these prisoners were left to die. But as Allah had planned, they not only survived but lived to tell the world about what conspired at Karbala and what they suffered on the road from Karbala to Syria.

Every time we hear renditions of Karbala, we imagine them to be in captivity—incapacitated and imprisoned while the tyrants roamed freely. But the teachings of Islam beg to differ. It was Yazīd who was captivated by power and wealth, a slave to his desires, so great that he ordered the killing of Imām Ḥusayn (ʿa), the grandson of Prophet Muḥammad (ṣ). Only when we look through the lens of Karbala does it become apparent that Sayyidah Zaynab (ʿa), Imām as-Sajjād (ʿa), and the pious family members of the Prophet (ṣ) were truly the ones who were free.

Despite what we may believe, freedom is not only material in nature. The Ahl al-Bayt (ʿa) had a different type of freedom despite their physical limitations: spiritual freedom. They were not captives of their ego or their desires. Their souls were not behind bars even if their material bodies were. The Noble Qurʾān states that we have been given life only to be tested. Each and every one of us, regardless of how little or plenty we have, is being tested. Allah has said in the Noble Qurʾān: “You will surely be tested in your possessions and your souls, … but if you are patient and Godwary, that is indeed the steadiest of courses” (3:186). Hence, when it comes to choosing between material or spiritual gain, which one should we be more content with: physical or spiritual freedom? If we choose the former while our souls are imprisoned, we transform our test to an eternal punishment. Our minds and souls become confined, unable to see the spiritual realities beyond this material world.

The Noble Qurʾān describes those who disbelieve, who have turned their hearts toward the material world, rather than the spiritual world, like those who are deaf, dumb, and blind. They have ears, yet do not listen, and eyes, yet do not see (2:171). Whether we are physically behind bars or not, the key to eternity is to be spiritually free. What can we truly gain if we walk freely on Earth while our minds and souls are behind bars, running after whims and desires? Only a truly liberated mind can understand that it is not worth selling our souls for the petty gains of this temporal world.

To be truly liberated, we have to recognize our current spiritual state. To do that, we must pay attention to our actions in order to assess ourselves accurately. For example, indifference to disobeying Allah, to immoral actions, to injustice and oppression is one of the clearest signs that the soul is imprisoned—caged in the deepest, darkest dungeon. People can be walking freely with the most advanced technology in their hands, wearing designer clothing, and looking their best. But, are they truly free if their souls are not aligned with the principles Allah has set forth?

When we look at the freedom that Allah has decreed for us, we see that we are unconstrained by physical limitations. Even if we cannot roam freely on Earth, we understand and see the vastness Allah has blessed us with in relation to our souls. As Imām ʿAlī (ʿa) has said, “You presume you are a small entity, but enfolded within you is the entire universe.” The expanse of a person’s soul, to roam freely therein, becomes unlimited when connected to the Originator. Whoever tries can achieve this enlightenment, without discrimination. It doesn’t matter whether you are rich or poor, of a particular race, color, or nationality. Rather, it is the recipient who chooses to reach for this enlightenment. If you want it badly enough, it can be yours. One must only be willing to sincerely try, and try hard enough.

After the events of Karbala, Imām ʿAlī as-Sajjād (ʿa) was unjustly imprisoned for a brief time, but it didn’t affect his spiritual freedom even for a moment. The supplications he read throughout his life, particularly those mentioned in Ṣaḥīfah al-Kāmilāt as-Sajjādīyya, testify to this. Being spiritually awake can then be defined as follows: when we realize that even if we have all the blessings and wealth this world has to offer, without Allah, there will always be something amiss. When the soul is aware of this, it will need something beyond the physical comforts to find contentment and peace.

It is undoubtedly hard to awaken the soul in today’s world amid this slumbering masses, where there are countless free bodies yet few souls that are truly free. If we could see the real spiritual state of others, many of us would actually wish for solitary confinement. But the reward is only amplified when waking up spiritually in the midst of a sleeping society. It takes courage, bravery, and resilience to wake up and stand for the truth of one’s creation and being, to stand against the grain of sin and worldly desires. However, this is not only what is needed from us, but required from all who are aspiring to be the companions of our awaited savior, the Mahdī (ʿaj), the one who will bring justice and freedom for all.