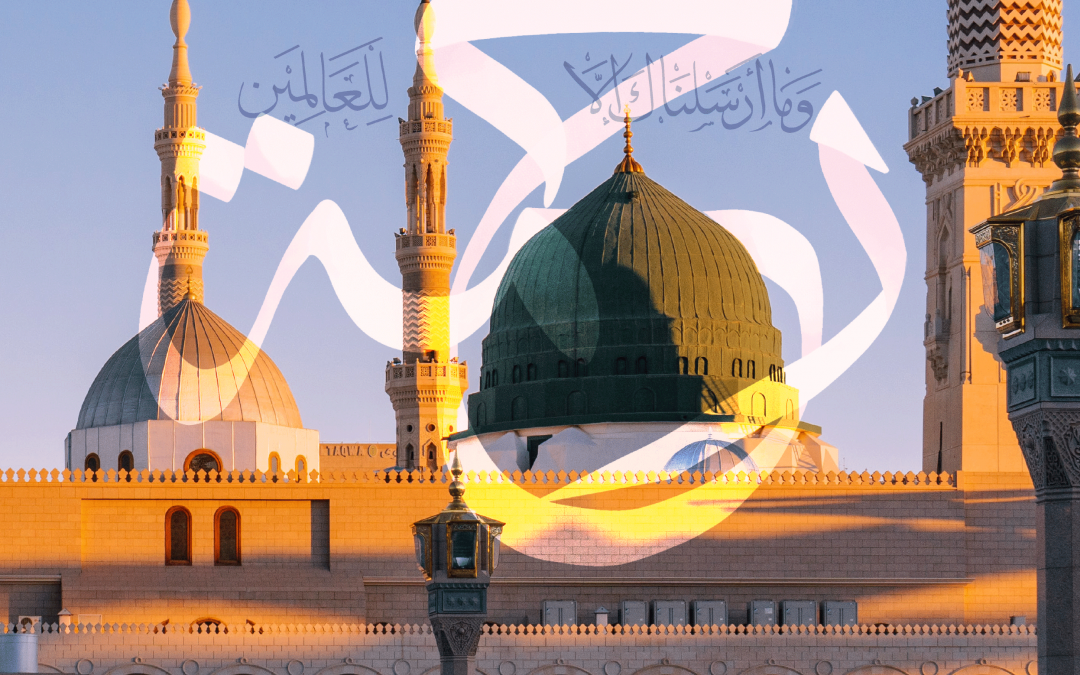 Arabian society—at the time of jāhiliyyah (ignorance)—was a society of tribal warfare and brutal cultural customs. There was no centralized government, so clans were created based on blood relations to create a sort of safety-net. Female newborns were buried alive because daughters were seen as a burden. People of the rich clans were filled with greed, and they took advantage of the poor. Few believed in the one, true God. In this time of jāhiliyyah, our beloved Prophet Muḥammad (ṣ), the Seal of Prophets, was born. Even before his Prophethood, he always believed in the message of Tawḥīd—the Oneness of Allah—that was brought by the Prophets before him. Allah sent the Prophet (ṣ) as a beacon of light to guide the people of Mecca to the right path.

The Noble Prophet (ṣ) was sent as a guide for us, as he has said, “I was sent to perfect akhlāq (moral character).” Allah says in the Noble Qurʾān, “We have not sent you [Muḥammad] but as a mercy to all the nations” (21:107). This ayah refers to the way that Allah sent the Noble Prophet (ṣ) to give and spread mercy to not just the people of Arabia but mankind as a whole. The Prophet (ṣ) was mercy, not just one who has mercy—there is a difference between the two. He embodied the perfect trait of mercy in the best way, in the way that Allah loves. Furthermore, the Noble Qurʾān makes it clear that all of mankind will benefit from his mercy. The Prophet’s (ṣ) mercy did not only extend only to believers, his mercy also extended to his enemies. It is narrated that after the battle of Uḥud, the Prophet (ṣ) prayed to Allah to overlook the actions of his enemies since they were in a state of ignorance.

Even before his appointment to Prophethood, as a youth in Mecca, Prophet Muhammad (ṣ) cared for people who had no one else. While in his youth, Prophet Muḥammad (ṣ), along with other youths of Mecca, created a treaty called Ḥilf al-Fuḍūl (the Covenant of High Morals). These young and noble men made a pact and promised to help any stranger who entered Mecca with no tribal or family support. During that time in history outsiders or foreigners were at risk of being treated cruelly by the Quraysh due to a lack of tribal or family support. The treaty remained for several decades and even after his appointment to Prophethood, Prophet Muḥammad (ṣ) vowed to uphold that promise and help those in need whenever he was called to do so.

Although the arrogant tribal mentality in Mecca was strong, the Noble Prophet (ṣ) remained firm in his message of humility. Abū Sufyān and some of the other strong tribal leaders came to Prophet Muḥammad (ṣ) and said that they would be willing to accept Islam, on the condition that they would not have to be associated with the poor, slaves, or other races.There was a companion who urged the Prophet (ṣ) to accept this, as he thought it would give the Muslims strength and wealth. Prophet Muḥammad (ṣ) refused, demonstrating the importance of destroying this arrogance.

This, and the spread of Islam, angered the wealthy tribe leaders in Mecca, and they began a boycott of the Muslims that lasted three years. During this time, the Prophet’s (ṣ) uncle, Abū Tālib, his wife, Lady Khadījah, and the Prophet (ṣ) used all of their wealth in the way of Allah to provide for the Muslims. Soon after, both Lady Khadījah and Abū Tālib passed away. This year became known as “The Year of Sorrow”, because of the pain it left in the heart of our Prophet (ṣ). Thereafter, Prophet Muḥammad (ṣ) took his people to Madina, in the Ḥijrah (migration) because many of the people in that city had accepted Islam.

When Prophet Muḥammad (ṣ) arrived in Medina, people climbed palm trees and sang hymns to welcome him and the Muslims. Every wealthy family wanted the Noble Prophet (ṣ) to be a guest in their home, including his mother’s relatives. As a sign for the people, Prophet Muḥammad (ṣ) allowed his camel to roam the city and find a place for him to stay. The camel stopped before the house of Abū Ayyūb al-Ansari, a God-fearing man who was the poorest man in Madina. Abū Ayyūb and his family took Prophet Muḥammad (ṣ) as his guest, and from then, it was clear to the people that the Noble Prophet (ṣ) would not give preferential treatment to the wealthy, blood relatives, or influential tribes. Allah’s Mercy to Mankind.

Through Prophet Muḥammad’s (ṣ) mercy, we find hope in a better path with the true Islam he brought. It was through his perfect connection to Allah that Prophet Muḥammad (ṣ) was able to change the hearts of the people surrounding him. We can take the lessons from the life of the Noble Prophet (ṣ) and strive to practice true Islam. We can start by doing what is wājib (obligatory), staying away from what is ḥarām (forbidden), repenting for our mistakes, and trying to perfect our own moral character. If we use the Noble Prophet’s (ṣ) divine light to lead us towards Allah, we can be a light for others in our own surroundings.