Sowing The Seeds For Ramadan 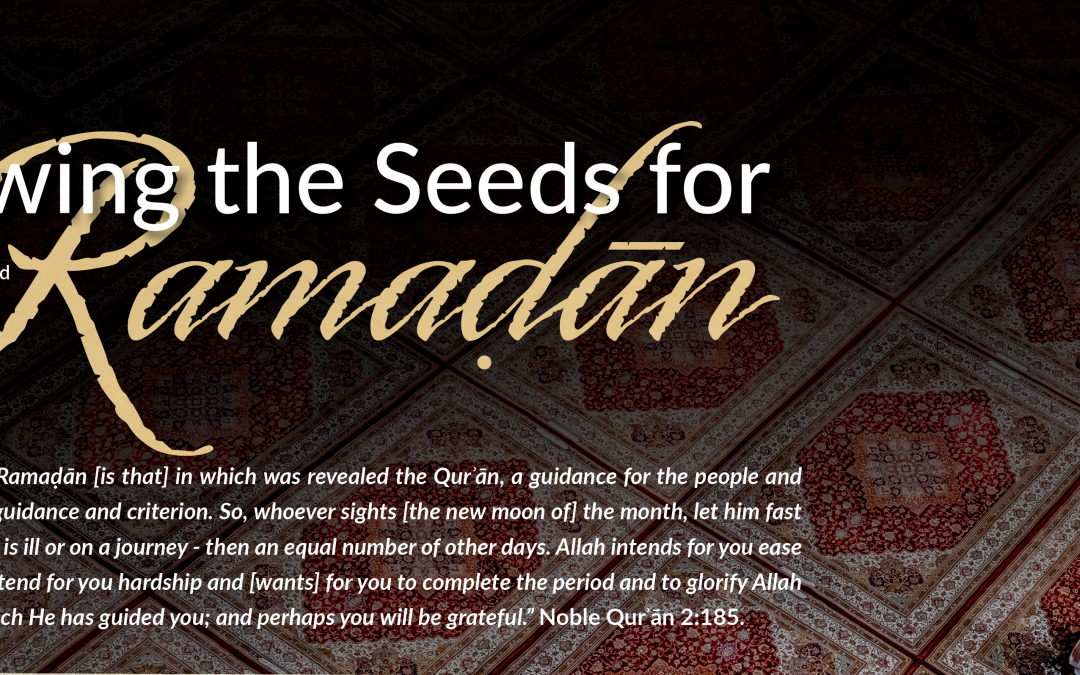 “The month of Ramaḍān [is that] in which was revealed the Qurʾān, a guidance for the people and clear proofs of guidance and criterion. So, whoever sights [the new moon of] the month, let him fast it; and whoever is ill or on a journey – then an equal number of other days. Allah intends for you ease and does not intend for you hardship and [wants] for you to complete the period and to glorify Allah for that [to] which He has guided you; and perhaps you will be grateful.” Noble Qurʾān 2:185.

Ramaḍān, the month of ritual fasting, is a special and blessed period for Muslims. It has the distinct honor of being the only month mentioned in the Noble Qurʾān. How can one sow the seeds that will bear fruit for the month of Ramaḍān so that we may fully take advantage of its blessings?

“O you who have believed, decreed upon you is fasting as it
was decreed upon those before you that you may become
righteous.” Noble Qurʾān 2:183.

It has been said that Rajab is the month to sow seeds of good actions, Shaʿbān is the month in which we should water those seeds, and Ramaḍān is the month in which we reap the harvest. There are many narrations quoted from the Noble Prophet (ṣ) and Infallible Imāms (ʿa) that recommend prayers, supplications, and fasting during the months of Rajab and Shaʿbān for the spiritual benefits one can acquire that help prepare for Ramaḍān.
In order to have maximum spiritual growth there is a need to prepare the ground upon which we will sow our seeds. The ground is the heart – we have to prepare it to receive the illumination of light from faith. This illumination in the heart can help one to stay firm and steadfast throughout the year, that is, if one is able to utilize the month of Ramaḍān correctly. If we achieve this goal during the blessed month, then the heart becomes one which is ready to resist the whims and negative forces which come our way attempting to pull us from the straight path.

“Shaʿbān is my month, and Ramaḍān is the month of Allah.”

It has been described thus because no other month can reach its holiness and excellence before Almighty Allah. Although they were ignorant, the people of the pre-Islamic era used to hold this month in the highest regard, and when Islam came, the month increased even more in veneration and excellence. Fasting is part of a strong spiritual and physical renewal
plan.

Fasting helps to recalibrate the soul’s focus on spirituality while diminishing the focus on materialism. The essence of Ramaḍān is the changing of one’s ways to become a better person – one who remains conscious of Allah throughout his or her life. The Noble Prophet (ṣ) then enumerated many rewards for those who fast for any number of days during Rajab. Shaykh Ṣadūq has also reported Imām Mūsā al-Kāẓim (ʿa) as saying:

“Rajab is (the name of) a river in Paradise that is whiter than milk and sweeter than honey. Hence, if one fasts for even a single day in Rajab, All-Mighty Allah will allow him to drink from that river.”

Shaʿbān, too, has been mentioned heavily in the traditions of the Ahl al-Bayt (ʿa). There are great rewards obtained from practicing devotional acts during it. The Noble Prophet (ṣ), to whom this month is attributed, used to fast during this month and encouraged others to imitate him by connecting the fasting of this month with the obligatory fasting of Ramaḍān.
Imām Jaʿfar aṣ-Ṣādiq (ʿa) is reported to have said: “Imām ʿAlī as-Sajjād ibn al-Ḥusayn (ʿa) used to gather all his companions at the beginning of Shaʿbān and say to them, ‘O my companions, do you know what this month is? It is Shaʿbān. The Noble Prophet (ṣ) used to say,
‘Sha’ban is my month.’ You should thus fast during this month as a sign of your love for your Prophet (ṣ) and as a sign of seeking nearness to your Lord. I swear by Him, Who grasps my soul in His Hand, that I heard my father Ḥusayn (ʿa), saying that he heard Imām ʿAlī, the Commander of the Faithful (ʿa), saying,

‘Anyone who fasts during Shaʿbān for the love of the Messenger of Allah (ṣ) to seek nearness to Almighty Allah, Almighty Allah will love him, and draw him nearer to Himself on the Day of Resurrection, and definitely reward him with Paradise.’’”

It has been also narrated that fasting during the month of Shaʿbān is one of the means of gaining the Noble Prophet’s (ṣ) intercession on the Day of Resurrection. Fasting on as many days as possible of this month improves one’s livelihood, protects against the evil of enemies, and allows entrance to Paradise. By recognizing the benefits of preparing for the beautiful month of Ramaḍān, we will be able to take full advantage of its special blessings. May Allah help us to achieve all of our spiritual goals and gain closeness to Him in His
special months of mercy.