She Saw Nothing But Beauty 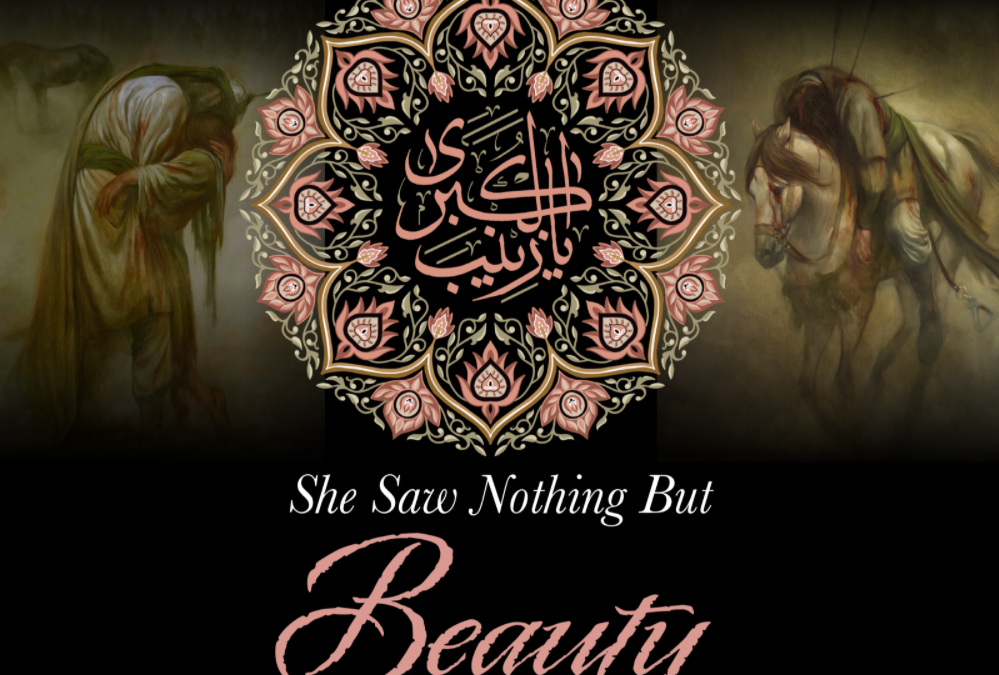 In the aftermath of the tragedy of ʿĀshūrāʾ, the caravan of Karbala has taken off, and the enemies have mercilessly taken the family of the Prophet (ṣ), tied them, and imprisoned them. At first look, it is made to seem as though they have been defeated, but a closer look at their illuminated faces shows nothing but victory. The Holy Household (ʿa) has inherited the lion heart of Imām ʿAlī (ʿa), especially his daughter, Sayyidah Zaynab (ʿa).

One of the most memorable utterances of the tragedy of Karbala is a line of Sayyidah Zaynab (ʿa) where she said, “I did not see anything but beauty.”

For us to come to a greater appreciation of what she said, let us look at the Qurʾān. The word beauty in the Qurʾān is zīnah.  When we look deeper for the definition of beauty or zīnah, we see that the Qurʾān introduces four types of beauty:

Through these four types of beauty, one can come closer to or fall further away from Allah. They act as a test for the believers.

The first amongst them is external beauty, the beauty that we can see and witness with our physical sight and touch. In the days of the Prophet (ṣ), there were people who embraced Islam in a way that did not match with the commandments of Allah. They would not take care of themselves; instead, they would seclude themselves in the mountains to worship and avoid marriage and other responsibilities, claiming that they were shunning the dunyā, the lowly world. They believed, falsely, that this is what Allah wanted. It was then that the following verse was revealed; this is the external beauty that Allah commands the Prophet (ṣ) to ask about:

No, Allah has not forbidden beauty. Instead, Islam encourages an external beauty so long as it is within the framework of Allah’s commandments.

The second beauty that we are tested with is addressed in the book of Allah as well. In the Noble Qurʾān, we see that Allah says:

“Say, ‘If your fathers and your sons, your brethren, your spouses, and your kinsfolk, the possessions that you have acquired, the business you fear may suffer, and the dwellings you are fond of, are dearer to you than Allah and His Apostle and to struggling in His way, then wait until Allah issues His edict, and Allah does not guide the transgressing lot.’” (9:24)

The most important things in our lives that we beautify ourselves with are mentioned here–our families, wealth, businesses, homes, and possessions. The test of this beauty comes when we are faced with the decision of choosing these things or adhering to Allah’s commands. The test lies in our obedience or lack thereof.

The third type of beauty is the one that believers must avoid, a beauty that is punishable. Unlike the previous two, this one warrants punishment from Allah. In the Noble Qurʾān, Allah poses a question for reflection:

“Is, then, he to whom the evil of his own doings has been made alluring so he considers it good [like one rightly guided]?” (35:8)

This is truly a troubling predicament to find oneself in. It is when an action is truly evil and ugly, but is falsely believed to be beautiful. This is a tactic of Shayṭān, who appears to make forbidden actions beautiful. It is when one claims a gathering of gossip is actually a discussion of politics, when the bribery taken was actually a gift, and where the interest was actually a business transaction. These actions are all types of a beauty that aren’t actually beautiful, but may appear so to the sinner.

Lastly, spiritual beauty is the type of beauty Sayyidah Zaynab (ʿa) was referring to in her famous sentence, “I saw nothing but beauty.”

What Imām ʿAlī (ʿa) meant is that the internal beauty that emanates from the soul, one that lifts us to spiritual heights, far outweighs the physical beauty that we see and witness. The spiritual essence and core of our actions, the intrinsic value that cannot be seen, is more weighty in the eyes of the Imām (ʿa).

We see that even the night after the heinous day of ʿĀshūrāʾ, Sayyidah Zaynab (ʿa) did not miss her night prayers (Ṣalāt ul-Layl). The internal beauty she exhibited then was her high level of faith—to worship Allah. Her love and affection for Him prevented her from being heedless of her prayers, even in the tumultuous situation she was facing.

Looking at the blood stained sands of Karbala, what was this spiritual beauty she saw? The beauty of such a tragedy revealed itself in the martyrs and those remaining living prisoners who exhibited faith (īmān), reliance on Allah (tawakkul), courage, and bravery. She saw the essence of what the tragedy of Karbala signified, and that is what led to her famous rebuttal to Yazīd, “I see nothing but beauty.”