Hurr – A Twist In Fate 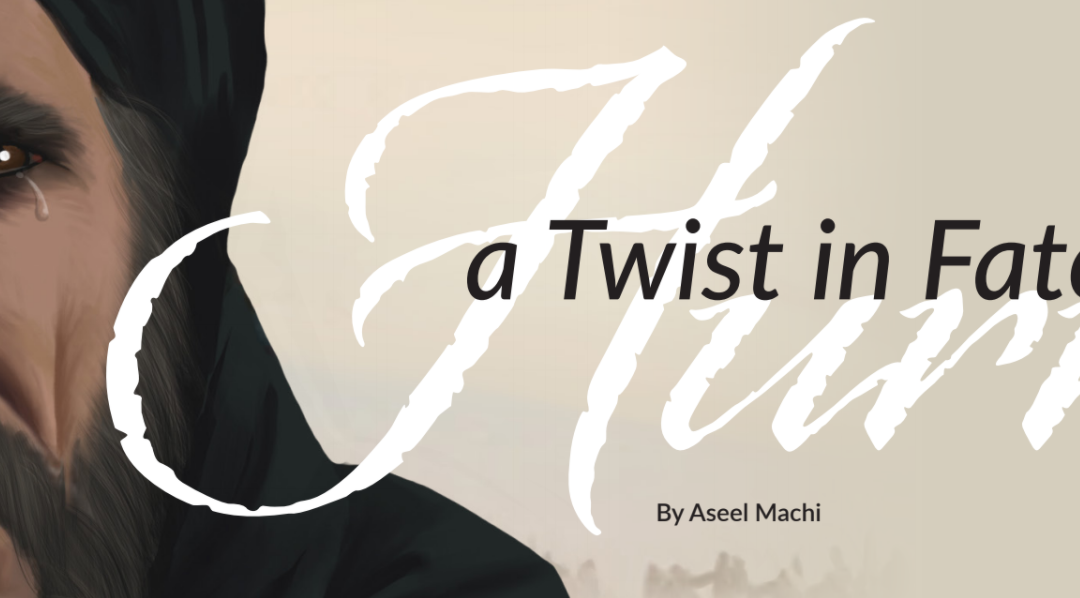 It goes without saying that surely at one point or another in history, Ḥurr was clearly a foe and an enemy to the Ahl al-Bayt (ʿa) and the Imām of his time, Imām Ḥusayn (ʿa). His role in the suffering of the Ahl al-Bayt (ʿa) at Karbala is tantamount to their weakness and eventual death sentence for the remainder of their days in the land of karb wa balāʾ (difficulty and hardship). However, what led to their physical suffering in the desert heat of Iraq ironically led to Ḥurr’s spiritual rise and success. A seed planted decades before of the love of Sayyidah Fāṭimah az-Zahrāʾ (ʿa) was the trigger for Ḥurr’s spiritual reformation. It would take many years after it had been sown, and the result is witnessed on the day of ʿĀshūrāʾ.

His full name was Al-Ḥurr b. Yazīd al-Rīyaḥī. His role in the battle of Karbala is unparalleled—he was a general of Yazīd’s army from Syria, sent on a mission to prevent Imām Ḥusayn (ʿa) from meeting the people of Kufa. He was not only able to stop the Imām (ʿa) from completing his mission, but General Ḥurr further cut off their access to the Euphrates River, leading to the thirst of the Holy Household (ʿa). This led to fatigue and exhaustion in Imām Ḥusayn’s (ʿa) army, the death of his infant son, and the feebleness of the household, including Imām Ḥusayn’s (ʿa) son and heir to the Imāmah, Imām ʿAlī as-Sajjād b. Ḥusayn (ʿa).

Though Ḥurr was doing his job and merely following orders from Damascus, his discomfort started to grow as the days of Muḥarram dragged on. Upon seeing the army of Yazīd intensify their efforts to increase the suffering of Imām Ḥusayn (ʿa) and prepare for an outright crushing of the rebellion, Ḥurr felt something awaken inside him. It is at this point that we see that Ḥurr himself represents what is at the essence and core of every human being: the battle between good and evil, ego and Allah, Heaven and Hell. In fact, Ḥurr’s growing discomfort with the battle to come between his own army and the opposing one is similar to what we often experience in our lives. Do we please others, or do we please Allah? Do we do what we want or what Allah wants? It is too often that we find ourselves between the two armies of truth and falsehood, ḥaqq and bāṭil, as Ḥurr did.

As the days neared the tenth of Muḥarram, the orders from Damascus were finalized: the small revolt led by Imām Ḥusayn (ʿa) was to be crushed completely. The men were to be killed in battle and the women to be taken captive. Ḥurr did not expect the situation to escalate to this level; after all, Imām Ḥusayn’s (ʿa) camp was not a threat to the tens of thousands of soldiers that had gathered on the side of Yazīd. With a handful of companions and his family, however, Imām Ḥusayn (ʿa) prepared for what was to come. It was at this point that Ḥurr’s internal conflict began to unravel, revealing the intricacies of his soul that make up our human souls too: constant oscillation between good and bad.

On the afternoon of the ninth of Muḥarram, Ḥurr looked to another general in the army, ʿUmar ibn Saʿd, who would later be responsible for the gruesome martyrdom of Imām Ḥusayn (ʿa). He asked him, “Will we really fight this Ḥusayn? Is there no path for resolution or peace?” ʿUmar ibn Saʿd, with his eyes and heart set on the promised reward for Imām Ḥusayn’s (ʿa) beheading, answered in the negative.  The night before the battle was to begin, the inner struggle of Ḥurr continued. In deep contemplation, Ḥurr made his famous statement, “I find myself between Hell and Heaven…”

The following day, after he recited the morning prayers, Ḥurr made his choice. It was the bounty of the Noble Prophet (ṣ) that Ḥurr looked for—the afterlife and promised eternal salvation of being in Allah’s pleasure. The promises of booty from this world paled in comparison to what would come.

And so, history narrates that Ḥurr bravely defected from his army. Nonetheless, upon heading toward the camp of Imām Ḥusayn (ʿa), the strength he once had as a general and warrior left his body. He was penitent and hung his head, dragging his feet reluctantly as he walked his horse toward the camp. Ultimately, it was his fault that Imām Ḥusayn (ʿa) now faced imminent death and the threat to his household’s dignity. Dr. Ali Shariati says poetically, “The creation of Ḥurr was completed and the fire of doubt has led him to the verity of certitude. He slowly approaches the camp of Ḥusayn (ʿa), and as he gets closer, he hangs his boots from his neck, and keeps his armor down (as a sign of remorse). ‘I am the one who closed your path, O Ḥusayn…’”

One can only imagine the pleasant surprise that Imām Ḥusayn (ʿa) had in his heart upon seeing the face of Ḥurr. But, on his face, there was nothing but affection, love, and warmth. Upon seeing Ḥurr, Imām Ḥusayn (ʿa) invited him into his camp several times, though Ḥurr resisted. He was full of shame and disappointment for what his hands had sown. How could he face the holy family after all that he had done, the family that included the likes of Sayyidah Zaynab (ʿa), the daughter of Sayyidah Fāṭimah az-Zahrāʾ (ʿa)? Yet, the world witnesses that as bad as Ḥurr’s actions were, Imām Ḥusayn (ʿa) was the good that balanced out this equation. We notice Imām Ḥusayn’s (ʿa) eagerness to accept Ḥurr upon seeing Ḥurr’s sincere regret. Those who understand his reaction know that the path of true faith wholeheartedly embraces the sincere. This is a means of hope for us.

Imām Ḥusayn (ʿa) and Ḥurr’s unity is one of many such examples in Karbala, but the story of Karbala is not only of unity, but also separation. The time had come for Ḥurr to defend Imām Ḥusayn (ʿa) and, in essence, Islam, at the front lines. The afternoon prayers were recited, and Ḥurr was ready to go forward; he charged with the ferocity and force of a warrior fighting for the cause of truth. While fighting in battle, Ḥurr begins to announce himself and his intentions:

“I am Ḥurr! I am standing in the presence of my guest who is the most noble to step upon this land! I will defend this noble man.”

It was after fighting bravely and dispatching many of the enemy’s soldiers that Ḥurr was overtaken and embraced his martyrdom. It is at that moment that Sayyidah Fāṭimah az-Zahrāʾ (ʿa) responded to Ḥurr’s remorse on the morning of ʿĀshūrāʾ. In Ḥurr’s last moments, as Imām Ḥusayn (ʿa) took Ḥurr’s head onto his lap, tying the handkerchief of Sayyidah Fāṭimah az-Zahrāʾ (ʿa) on his bleeding forehead, it was as if Sayyidah Fāṭimah az-Zahrāʾ (ʿa) herself had accepted his sacrifice. Upon his martyrdom, Imām Ḥusayn (ʿa) declared Ḥurr truly free in both this world and the Hereafter, as his mother had named him Ḥurr, which means freedom in Arabic. The general had indeed died as a soldier of war, but this time, for the side of good and justice, earning Allah’s eternal jubilation and provisions. In the Noble Qurʿān, Allah says:

“Do not consider those who are slain for the cause of God to be dead. They are alive [receiving sustenance] but you are unaware of them.” (2:154)

It becomes clear through the words of Allah that Ḥurr’s story has become one as old as eternity itself. It is repeated every year during the annual commemoration of the tragedy of Karbala and recounted with inspiration, hope, and motivation for all to hear. Allah has indeed provided him with eternal sustenance. The story of Ḥurr has become infinite, not limited to time or space. Ḥurr represents the human ability to see right and wrong and rise to the challenge for truth that surpasses worldly desires and aims. In the beginning, and in the end, Ḥurr’s story is the same as our story. May we choose the side of truth not only in defining moments of our lives, but even in the seemingly insignificant ones.