A Safe Haven In Persecution 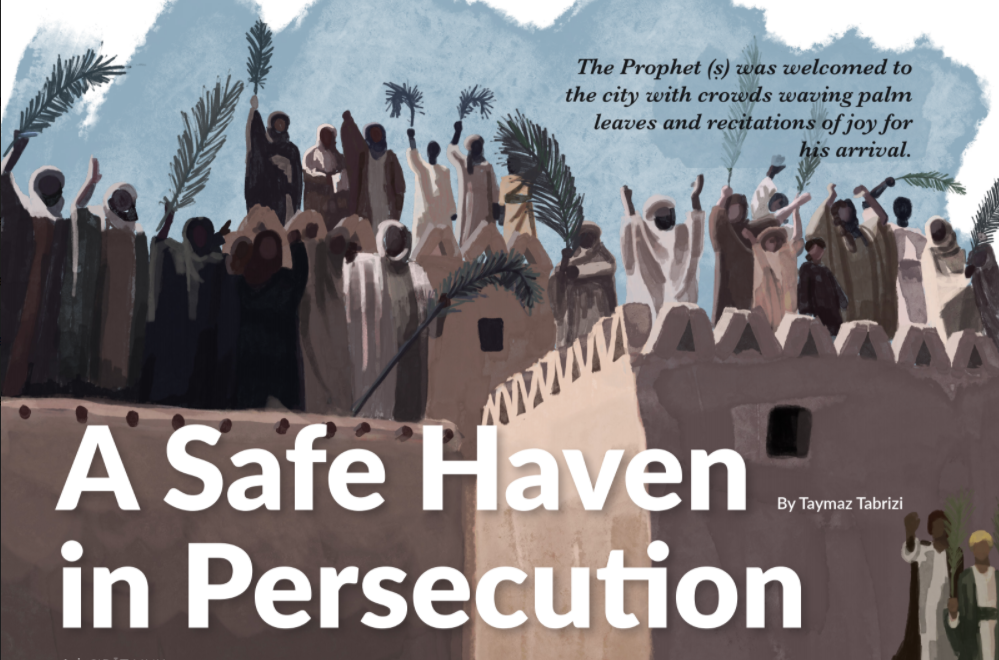 It was the year 622 A.D. when the Prophet Muḥammad (ṣ) fled from Mecca, north to the city of Medina. As the Prophet (ṣ) had lost his sole patrons and protectors, most notably Abū Ṭālib (ʿa), he could no longer live in the city in light of the plots of the leaders of the Quraysh (the leading tribe of Mecca) to have him murdered. The Meccan leaders had tried many ways to  discredit Islam and intimidate the Prophet (ṣ) into stopping the message of Allah. However, when their plots  failed, they attempted to assassinate him. This triggered the Prophet’s (ṣ) migration to a new and safer city.

The Prophet’s (ṣ) move to Medina came to be known as the Ḥijrah (the Great Migration) which established the first year of the Muslim calendar. Medina had become his destination as some of the tribes of that city had heard about the Prophet’s (ṣ) outstanding character, offering him refuge and protection in their city. In return, the Prophet (ṣ) would help them resolve some of the tribal disputes that had plagued the city for so long.

This event in the Prophet’s (ṣ) life was significant as it teaches Muslims that they do not need to live in an area that poses a physical, mental, or spiritual danger to them. Sometimes bravery is not resisting bad environments, but having the courage to move to a different place that can better help us grow as Muslims and serve Allah better. It also teaches us that we should give priority in being with people who will protect us and give us an opportunity to do good rather than simply hurting ourselves, especially in cases where there is not much hope.

The road to Medina was not an easy one. Notwithstanding the harsh climate of the desert, the Prophet’s (ṣ) would-be assassins had followed him into the desert, but Allah thwarted them. For example, one would-be assassin, Surāqah bin Mālik, hunted the Prophet (ṣ) in order to collect a bounty that the Meccans had put on his life. Yet every time Surāqah would come close to the Prophet (ṣ), his horse would either flee or would flounder in the sand.

This story is significant as it teaches us that if Allah wills something, there is no force in existence that can thwart it or prevent it from happening. What we see as simple coincidences in life are often Allah’s silent way of speaking to us and guiding us to salvation.

The Messenger of Allah (ṣ) eventually made it to Medina through the protection that his Lord gave him. Upon his arrival, many people competed to have the Prophet (ṣ) stay at their homes. However, the Prophet (ṣ) let his camel guide the way, agreeing to stay anywhere the camel would eventually settle.

His camel stopped at the home of a Medinan man named Abū Ayyub al-Anṣārī who was a person of ordinary and humble means. This shocked the residents of the city as they had expected the Prophet (ṣ) to settle with the rich and aristocratic elite of the city. People’s value in God’s eyes are not measured by their social or economic statuses but by their piety and character.

After settling, the first task of the Prophet (ṣ) in his new city of residence was to find a piece of land and build a mosque. Two orphans, Sahl and Suhayl, had offered the Prophet (ṣ) a small piece of land they owned which had been used as a grave site. The piece of land happened to be right next to al-Anṣārī’s house. The Prophet (ṣ) refused it as a gift and would only accept it by purchasing it from the orphans. It was then that al-Anṣārī purchased the land on his behalf and the Prophet (ṣ) proceeded to build the Mosque with his bare hands.

The mosque would be known as al-Masjid al-Nabawī (The Prophet’s (ṣ) Mosque), one of the most sacred sites in Islam. Al-Masjid al-Nabawī is where Islam was established as a structured religious, social and cultural force. It was a place where legal and political disputes were settled, as well as where the poor and oppressed elements of society could find shelter and support. It eventually became the burial place of the Prophet (ṣ) which millions of people visit every year. As significant as al-Masjid al-Nabawī is, it is important to note that it partly owes its existence to the generosity and compassion of two marginalized orphans and a man of humble means.

This snippet of the Prophet’s (ṣ) life is a great example of why we should not despair in life, instead having great hope in Allah and His plans. This world has not been left to chaos and anarchy. The world has a Lord and He is Allah and the result of everything stops with Him. The Prophet (ṣ) understood this very well. This is why when the world conspired against him, he did not let it bother him. He took responsibility for doing what he had to do, but in the end he left the results to Allah. This concept in Islam is known as tawakkul (patient reliance on Allah). Islam teaches us that our actions can influence events but their ultimate outcomes are with Allah.

In this sense, the Prophet (ṣ) exerted action coupled with faith. He did what he had to do but did not attach his heart to results which is often the source of our pain and suffering in life. Effortless action was his way of flowing through the world like water, not resisting, but working with the power of the Cosmos. There was never an attempt to control, to resist, but simply flow, going forward with complete reliance on Allah.